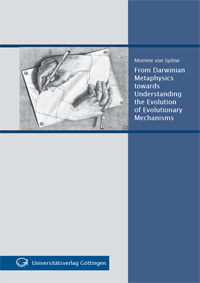 From Darwinian Metaphysics towards Understanding the Evolution of Evolutionary Mechanisms

A Historical and Philosophical Analysis of Gene-Darwinism and Universal Darwinism

Although Charles Darwin predicted that his theory “would give zest to [...] metaphysics,” even he would be astonished at the variety of paths his theory has in fact taken. This holds with regard to both gene-Darwinism, a purified Darwinian approach biologizing the social sciences, and process- Darwinism found in the disciplines of psychology, philosophy of science, and economics. Although Darwinism is often linked to highly confirmed biological theories, some of its interpretations seem to profit from tautological claims as well, where scientific reputation cloaks ideological usage. This book discusses central tenets of Darwinism historically as well as systematically, for example the history of different Darwinian paradigms, the units-of-selection debate, and the philosophical problem of induction as basis of metaphysical Darwinism. Crucially the book addresses the Darwinian claim that evolution is governed by an immutable and unrelentingly cruel law of natural selection. Paradoxically, Darwin’s theory is a static, non-evolutionary theory of evolution. The current book sketches the historical background and provides suggestions that may help to replace this approach by the idea of an evolution of evolutionary mechanisms (see Escher’s “Drawing Hands” on the cover). This view even suggests a tendency to overcome the blindness of the knowledge acquisition of primordial Darwinian processes and allows for some freedom from external environments. This book first develops a radically Darwinian approach, then criticises this approach from within. Even Darwinism has a tendency to transcend itself. Although the book addresses several empirical issues, it does not challenge particular findings. Instead it builds on many insights of Darwinism and provides a proposal for interpreting known empirical evidence in a different light. It should help pave the way for further developing an understanding of nature that transcends Darwinian metaphysics.