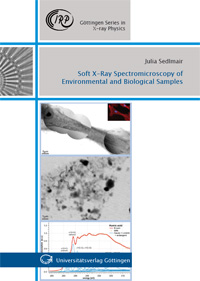 Soft x-ray spectromicroscopy was used to investigate environmental and biological specimens paying particular attention to their carbon content, of organic or anthropogenic origin. To be more specific, energies in the spectral region of the so-called water window, between the K absorption edges of carbon (284 eV) and oxygen (523 eV), were applied. In this region the absorbance of substances of high carbon content such as proteins is ten times higher than the absorbance of water which provides natural contrast and in turn allows for a natural or close to natural environment for such samples. The experiments presented in this thesis were chosen in such a way that either new instruments or new analysis methods are studied on different non-model sample specimens. To understand the effect of nanoparticles on the environment, the interaction between carbon nanotubes and soil was monitored, both in dry and aqueous sample environment. Additionally, for the characterization of heterogeneous samples like soils, spectroscopic experiments with a laser driven plasma source were performed. It demonstrated the feasibility of such a complementary technique, if not sometimes alternative to NEXAFS studies using synchrotron radiation. In the third project the possibility to image vascular smooth muscle cells without the necessity of additional embedding or staining was inquired, but by applying a simple, non-cryo ﬁxation sample preparation.