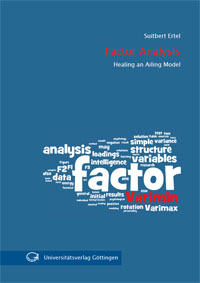 Exploratory factor analysis (EFA) is a statistical tool for digging out hidden factors which give rise to the diversity of manifest objectives in psychology, medicine and other sciences. EFA had its heyday as psychologist Leon Thurstone (1935 and 1948) based EFA on what he called the “principle of simple structure” (SS). This principle, however, was erroneous from the beginning what remained unrecognized despite subsequent inventions of more sophisticated statistical tools such as confirmatory analysis and structural equation modeling. These methods are highly recommended today as tolerable routes to model complexities of observation. But they did not remove the harmful errors that SS had left behind. Five chapters in this book demonstrate and explain the trouble. In chapter 2 the ailment of SS is healed by introducing an unconventional factor rotation, called Varimin. Varimin gives variables of an analysis an optimal opportunity to manifest functional interrelations underlying correlational observations. Ten applications of Varimin (in chapter 2) show that its results are superior to results obtained by the conventional Varimax procedure. Further applications are presented for sports achievements (chapter 3), intelligence (chapter 4), and personality (chapter 5). If Varimin keeps on standing the tests new theoretical building blocks will arise together with conceptual networks promoting a better understanding of the domains under study. Readers may check this prognosis by themselves using the statistical tool (Varimin) which is provided by open access in the internet.