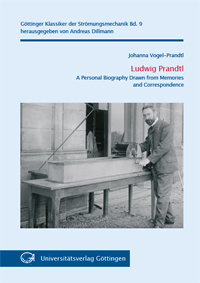 A personal biography drawn from memories and correspondence

When Ludwig Prandtl took up the Chair of Applied Mechanics at Göttingen University in 1904, the small university town became the cradle of modern fluid mechanics and aerodynamics. Not only did Prandtl found two research institutions of worldwide renown, the Aerodynamische Versuchsanstalt (AVA) and the Kaiser-Wilhelm-Institut für Strömungsforschung, but with the so-called ‘Göttingen School’ he also established an exceptionally fertile line of scientific thinking, unique for its special balance of intuition for physics and mathematical precision. The scientific methods developed by Prandtl and his pupils are manifested in numerous dissertations, monographs and textbooks that now rate as classics and hence belong to the fundamental works on fluid mechanics. Yet many of these publications have long been out of print and inaccessible for study. The series Göttinger Klassiker der Strömungsmechanik is thus making available selected publications that emerged from Ludwig Prandtl’s ‘Göttingen School’ or stand in a particular historical relationship to it. This highly personal biography of Ludwig Prandtl compiled by his daughter, Johanna Vogel-Prandtl, is complemented by numerous photographs depicting Prandtl’s working and private life. It completes the picture of the founding father of modern fluid mechanics whose scientific importance continues to resonate to this day.