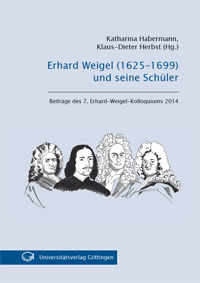 Erhard Weigel (1625-1699) was a German mathematician, astronomer, educator, philosopher, and inventor. He was professor of mathematics at Jena University and is considered a key figure in the development of the mathematical sciences of the 17th Century. In particular, he is known to be the teacher of the young Gottfried Wilhelm Leibniz (1646-1716) and other notable students. These proceedings record papers presented at an international colloquium held at the Göttingen State and University Library in collaboration with the Erhard Weigel Society based in Jena on December 5-6, 2014. The colloquium was concerned with Erhard Weigel and some of his many students as well as discussed his contribution to the history of science as an excellent educator. Moreover, the colloquium dealt with the flow of impact of his methods and ideas into the scientific community, whose members played a significant role in the scientific revolution of the 17th Century. Finally, a list of known students who attended Weigel's lectures is given.