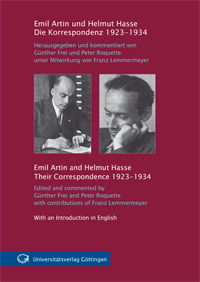 This book contains the full text of the letters from Emil Artin to Helmut Hasse, as they are preserved in the Handschriftenabteilung of the Göttingen University Library. There are 49 such letters, written in the years 1923-1934, discussing mathematical problems of the time. The corresponding letters in the other direction, i.e., from Hasse to Artin, seem to be lost. We have supplemented Artin‘s letters by detailed comments, combined with a description of the mathematical environment of Hasse and Artin, and of the relevant literature. In this way it has become possible to sufficiently reconstruct the content of the corresponding letters from Hasse to Artin too. Artin and Hasse were among those who shaped modern algebraic number theory, in particular class field theory. Their correspondence admits a view of the ideas which led to the great achievements of their time, starting from Artin‘s L-series and his reciprocity law towards Hasse‘s norm symbol, local class field theory and the Local-Global Principle. These letters are a valuable source for understanding the rise and development of mathematical ideas and notions as we see them today. The book is a follow-up of our earlier book on the correspondence between Hasse and Emmy Noether. It is thus the second of a series which aims to open access to the rich collection of Hasse‘s mathematical letters and notes contained in the Göttingen Handschriftenabteilung.